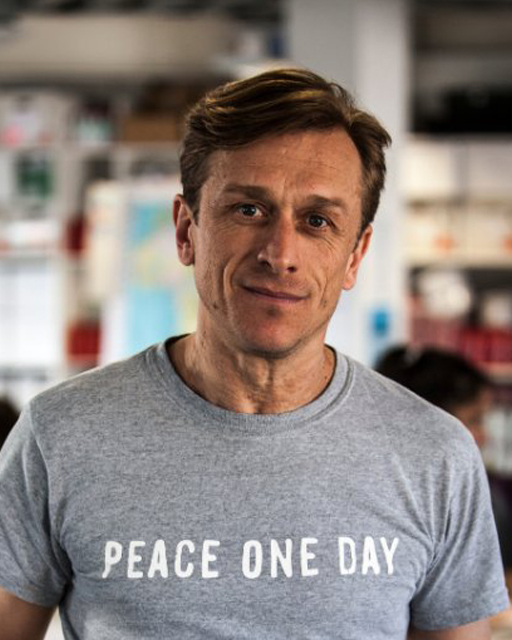 Every year, we are privileged to meet extraordinary people during the annual Mountain Partners Entrepreneurs’ Day by the beautiful Lake Tegernsee. It is our pleasure to share our discussion with you. Today, we meet Jeremy Gilley. In 1999, Jeremy founded Peace One Day, a non-profit organization that successfully led the campaign which resulted in the unanimous adoption by United Nations Member States of the first ever ‘Peace Day’ – an annual day of global ceasefire and non-violence with a fixed calendar date: 21 September.

MP: Maybe you can just start explaining a bit what you do and what is “Peace One Day” for our readers.

JG: My name is Jeremy Gilley and I'm the founder of Peace one day. 20 years ago, I had an idea to try and create the first-ever Peace Day with a fixed calendar date, the 21st September and have that day voted as a day of ceasefire and non-violence by every member state of the United Nation and every government of the world. I had no idea that I would achieve that goal. But after years of working hard, we had no money, you know, we were just volunteering and whatever we needed people gave it and eventually, after building the case meeting the darling armor and Nelson Mandela and Shimon Perez, Mary Robinson, Oscar Arias and many others. We got so much momentum that it was unanimously adopted by every member State of the general assembly of the United Nations and that was incredible and then, once we achieve that then I set out to prove that they could work and that took me into Afghanistan for a few years where we negotiated the process that led to the Taliban agreeing not to kill on that day or kidnap or harm anyone. As a consequence, I also had meetings with Karzai, NATO, ISAF and the UN. Again, we generated so much momentum that the day was honored by the Taliban and as a consequence of that WHO and UNICEF were able to vaccinate or take in 10,000 vaccinators, which then meant we could vaccinate 1.4 million children against polio since then we've been telling a lot of people about the day and working with working with businesses. No matter how big or small the business is, we are going to put a bit of fuel in my tank and we in turn give them some values and some content. And build something together, which they're able to then communicate to their Workforce or to their B2B or their consumers or indeed to new recruits. You want to work for such companies that demonstrate as a company that they care about a more peaceful and sustainable world. So that's a beautiful partnership, a little bit like a racing car races around the track because it has a logo on the side, we can do our work because businesses support us. That's why it was such an honor to be here at Mountain Partners event and be asked to speak at U-Tag because this is probably one of the greatest gatherings in Europe of business individuals. And it's a massive honor for me to have the opportunity to tell people about what we do.

Businesses have to make money, right? Otherwise, it won't be a business but it also has a responsibility to support the creation of a more peaceful world.

MP: Now let’s speak on the role of technologies and how you’ve seen technologies evolving over the years and helping you spread your message across the world. How differently would you proceed if you would start “peace one day” today? Notably in terms of social networks.

JG: Technology is allowing us to tell a lot of people about the day. When I started, 20 years ago, we didn't have computers. Facebook didn't exist and none of the social media. Half of the period we’ve been in business, 10 years, we weren't using these things the other half we started but it's only in the last couple of years that we've been so prolific at it. Now we can communicate with a lot of people really quickly and really efficiently. Data is king and we use software in the office to send out information, manage the data, collect it, clean it. Today social media is one of our main priorities. We're using about five different platforms on all of those accounts. So, we're running about 16 accounts every single day are communicating to about 1.2 million people, which is a reasonable number! In the next few years, we want it to increase exponentially as our target is to have three billion people totally aware of the day by 2025. We reckon we're at about probably about 1.5 billion right now.

Another target for us is to try, on peace day, to decrease cyber violence and it's important I think for your people to know or businesses to know that only 5% of the violence that's going to happen on any given day is going to happen in an area of conflict. That means 95% of the violence that happens on any given day is going to happen in homes, communities, schools or offices in every country of the world. The problem is all around us right now and therefore we all have a role to play in the peace process particularly us businesses. Businesses have to make money, right? Otherwise, it won't be a business but it also has a responsibility to support the creation of a more peaceful world. Of course, it does because if it doesn't support a peaceful sustainable world, then you can't do business anyway. And so, that's what we say to businesses in order work together. It's going to cost you something but just work with us and it's going to cost a small amount but in, the grand scheme of things it’s nothing.

We're creating a brand-new profiling system which measures and showcases an individual's positive contribution to a more peaceful and sustainable world.

That's where we are going for very large numbers. We have very clear targets. We want to hit three billion people totally aware, not exposed, 3 billion people to be fully aware of peace one day by 2025. This year, we will see young people mobilized in all 193 member states. We want to decrease violence generally, but also in the cyber world and measure it on the day, which we know we can and we want to take new technologies such as impact profile to the world. So, we're creating a brand-new profiling system which measures and showcases an individual's positive contribution to a more peaceful and sustainable world. I mean Humanity is not going to survive if we continue as such. If we last 300-400 years I'd be surprised. We have not been clever enough to protect our environment. That's a sad thing. And that's just how it is. You're going to see mass movement, mass conflict, mass population, environmental changes and that's just terrific. So, for example, if you look at LinkedIn, LinkedIn was created because it was a showcase for our business. Because business is important. If humanity survival had been important it would have been not been called LinkedIn, it would have been called an impact profile.  I'm just interested in the creation that these kinds of new Legacy systems which are inevitably going to in a profiling system to showcase an individual's contribution through his heating choices, travel choices, consumption choices, volunteering, donating. We built this system. Will we be the market leader in it? I don't know. I hope so, but it doesn't really matter because if somebody overtakes us and it means that young people are making a difference and showcasing then who cares.

MP: Have you been considering working with the big social network?

JG: I'd love to! You know if anyone came on to me and said right now, I'd like to help on your ideas, it would be amazing. If someone would say we know about tech we're going to help you run it and we want a part of the equity, I would immediately say fantastic. I don't own anything. Peace one day owns the equity, I created something that a non-profit owns which is really exciting. So, peace one day is an equity holder of a new tech business. The other Equity holders are people who are making impact Investments. It's really quite cool.

MP: We really like the idea. I mean nowadays you're “instagramming” everything but it's the wrong purpose, right? It's you who want to showcase yourself just for self-interest, but I mean it's good to have transparency and to show yourself for the good reasons. If you do something you should tell everybody about it. I mean, there's nothing wrong about it. But indeed, you need to have a platform for this, a sort of special platform.

JG: Yes, a special platform! Which means, let's say you wanted to work for Unilever which is a  corporation that cares about values and impact then Paul Polman, the former CEO, is going to look at you and go “Hey, listen, I like the qualifications but why I really like about you is your ability to make an impact in this world, your ideas and your creativity which are completely aligned with what we want in our business.” No, we didn't develop that 10 years ago because that wasn't what businesses needed but it is what businesses need now because they're talking about it. They talk about profit and impact. So, do you see how natural it is? It's naturally going to be built this way. We just happened to have had the idea before anybody else. Whether you know the right business people come along and say to me, “okay, you've had the idea we're now going to invest in you.” That's what I want to happen.

MP: That's the best way also to have business which can have a real positive impact but which are also self-sustainable.

JG: Yeah, the whole point of it should allow you to make some money. Because you want the people who owns Equity to make money. Guess what? Peace one day is one of those people! Yeah, right. So, it's my way of going “Okay, how can I put peace one day into a financially successful situation?” Not myself. I've got a nice car, I've got a flat, a little boat. I don't need anything else. So, I don't need to be the owner of a big tech company, but it's good.

If peace one day is the owner of a big tech company, it would be amazing. We could do great things in the world. I wouldn’t have to run around saying hey, can you give me 5k? Let’s really fuel the machine!

MP: Thank you for your time and energy, please keep on doing so!